Located 3 miles off Guernsey’s east coast is the peaceful and tranquil Herm Island, measuring 1.5 miles from end to end and just 0.5 miles wide.  This idyllic island’s resident population are reliant upon tourism as the backbone of its economy and each summer, as many as 100,000 make the journey by ferry as well as those who visit by private pleasure craft to enjoy all that this beautiful island has to offer.

Its small community has no need for the breadth of full-time emergency service workers that larger communities are accustomed to but instead is reliant upon a strong and committed group of volunteers  across all three blue light services.  In support of those volunteers, Guernsey’s St. John Ambulance & Rescue Service delivers regular training to Herm’s small team of first aiders and community first responders.

Lesley Bailey, wife of Herm Island’s Director of Finance and Administration, is one of the Island’s community first responders.  Last year, Lesley received confirmation that she had secured a non-charity place in the 2014 London Marathon.  Although she was not required to raise money for a charitable cause Lesley none the less decided to use the occasion as the catalyst for fundraising.  Appreciating that the St. John Ambulance & Rescue marine ambulance, Flying Christine III, is a welcoming and comforting life-line to the residents and visitor economy of Herm, Lesley decided that it would be one of two causes that would benefit from her fundraising initiatives.

With a career background in the catering and hospitality industry, Lesley’s marathon training schedule was punctuated by food centered charity events including selling various homemade preserves and hosting a curry night for Islanders.  Lesley raised a creditable total of £467.50 for the Flying Christine III which was matched by her time of 4:16:12 for completing the 26.2 mile course last April.

Congratulations Lesley and many thanks from the crew of Flying Christine III. 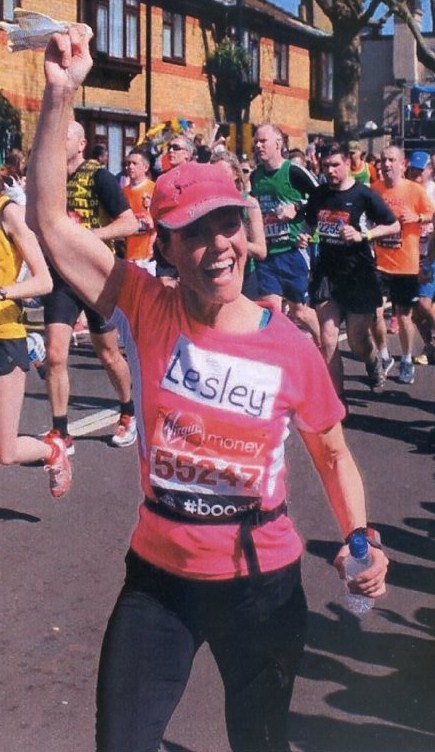